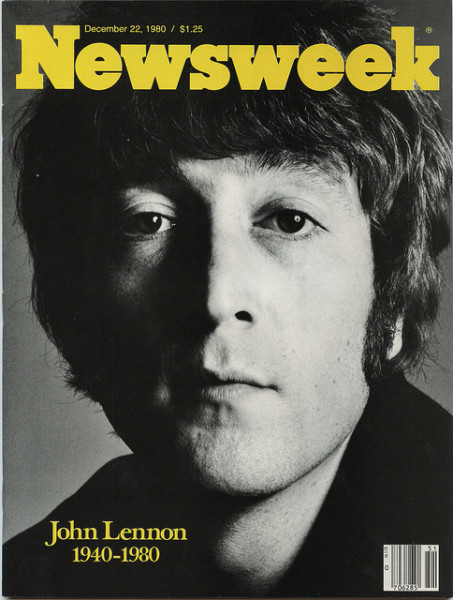 On this day in 1980 the Associated Press reported that shortly after 11:25 p.m., Eastern Standard Time John Lennon had been shot. It happened in New York. On the Upper West Side.” In fact, Lennon had been declared dead some 10 minutes earlier in the emergency room of a Manhattan hospital—news that millions of Americans would receive, jarringly, from Monday Night Football announcer Howard Cosell, breaking into the regular commentary on that evening’s contest between the Miami Dolphins and New England Patriots: “An unspeakable tragedy, confirmed to us by ABC News in New York City: John Lennon, outside of his apartment building on the West Side of New York City…shot twice in the back, rushed to the Roosevelt Hospital, dead on arrival.” John Lennon and his wife, Yoko Ono, were returning home from a transfer session at a midtown Manhattan recording studio at approximately 10:50 p.m. on this day in 1980, when they exited their limousine onto the West 72nd Street sidewalk just outside their apartment building, the now-famous Dakota. On nearly the same spot some six hours earlier, Lennon had signed his autograph on a copy of his new album, Double Fantasy, for the man who would soon shoot him dead: Mark David Chapman. In his statement to the authorities later that evening, the 25-year-old Chapman, whom police took into custody peaceably after finding him reading a copy of The Catcher in the Rye at the site of the shooting, said, “I’m sure the large part of me is Holden Caulfield, who is the main person in the book. The small part of me must be the Devil.” A worldwide outpouring of grief and tribute followed John Lennon’s assassination, culminating in a 10-minute silent vigil on December 14 that saw some 100,000 people gather in New York’s Central Park and tens of thousands of others in cities around the world. Of Chapman, who pled guilty to Lennon’s killing and was sentenced to 20 years to life in prison, Yoko Ono would later say, “I don’t even want to think about him, and I usually don’t. Because it’s so irrelevant who pulled the trigger. That was not what was relevant. The fact that John’s gone is what we’re living with.”
Collapse