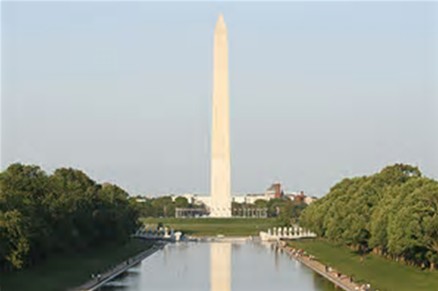 On this day in 1884, in Washington, D.C., workers place a nine-inch aluminum pyramid atop a tower of white marble, completing the construction of an impressive monument to the city’s namesake and the nation’s first president, George Washington. As early as 1783, the infant U.S. Congress decided that a statue of George Washington, the great Revolutionary War general, should be placed near the site of the new Congressional building, wherever it might be. After then-President Washington asked him to lay out a new federal capital on the Potomac River in 1791, architect Pierre L’Enfant left a place for the statue at the western end of the sweeping National Mall (near the monument’s present location). It wasn’t until 1832, however–33 years after Washington’s death–that anyone really did anything about the monument. That year, a private Washington National Monument Society was formed. After holding a design competition and choosing an elaborate Greek temple-like design by architect Robert Mills, the society began a fundraising drive to raise money for the statue’s construction. These efforts–including appeals to the nation’s schoolchildren–raised some $230,000, far short of the $1 million needed. Construction began anyway, on July 4, 1848, as representatives of the society laid the cornerstone of the monument: a 24,500-pound block of pure white marble. Six years later, with funds running low, construction was halted. Around the time the Civil War began in 1861, author Mark Twain described the unfinished monument as looking like a “hollow, oversized chimney.” No further progress was made until 1876–the centennial of American independence–when President Ulysses S. Grant authorized construction to be completed. Made of some 36,000 blocks of marble and granite stacked 555 feet in the air, the monument was the tallest structure in the world at the time of its completion in December 1884. In the six months following the dedication ceremony, over 10,000 people climbed the nearly 900 steps to the top of the Washington Monument. Today, an elevator makes the trip far easier, and more than 800,000 people visit the monument each year. A city law passed in 1910 restricted the height of new buildings to ensure that the monument will remain the tallest structure in Washington, D.C.–a fitting tribute to the man known as the “Father of His Country.”


Comment............ Washington 2016 – This capital's iconic Washington Monument will remain closed for at least the next 2 1/2 years, the US National Park Service said Friday. The 170-meter (555-ft.) tower was shut down on Aug. 17 following repeated problems with the structure's elevator. Financier and philanthropist David Rubinstein has agreed to provide up to $3 million for a major upgrade to the elevator, having earlier donated $7.5 million to repair the damage done to the monument by a 2011 earthquake. But while the funding for the elevator overhaul is secured, there is no date set for the start of the work, according to The Washington Post. The Park Service is awaiting congressional approval of funding for a new security screening facility at the site, a project officials want to carry out at the same time as the improvements to the elevator, the Post said. Work on the monument to honor George Washington, the nation's first president, got under way in 1848 and the obelisk was dedicated in 1885. The Washington Monument receives more than 500,000 visitors a year.
Collapse