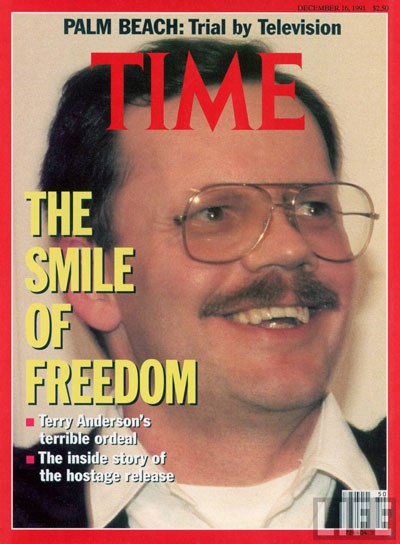 On this day in 1991, Islamic militants in Lebanon release kidnapped American journalist Terry Anderson after 2,454 days in captivity. As chief Middle East correspondent for the Associated Press, Anderson covered the long-running civil war in Lebanon (1975-1990). On March 16, 1985, he was kidnapped on a west Beirut street while leaving a tennis court. His captors took him to the southern suburbs of the city, where he was held prisoner in an underground dungeon for the next six-and-a-half years. Anderson was one of 92 foreigners (including 17 Americans) abducted during Lebanon’s bitter civil war. The kidnappings were linked to Hezbollah, or the Party of God, a militant Shiite Muslim organization formed in 1982 in reaction to Israel’s military presence in Lebanon. They seized several Americans, including Anderson, soon after Kuwaiti courts jailed 17 Shiites found guilty of bombing the American and French embassies there in 1983. Hezbollah in Lebanon received financial and spiritual support from Iran, where prominent leaders praised the bombers and kidnappers for performing their duty to Islam. U.S. relations with Iran–and with Syria, the other major foreign influence in Lebanon–showed signs of improving by 1990, when the civil war drew to a close, aided by Syria’s intervention on behalf of the Lebanese army. Eager to win favor from the U.S. in order to promote its own economic goals, Iran used its influence in Lebanon to engineer the release of nearly all the hostages over the course of 1991. Anderson returned to the U.S. and was reunited with his family, including his daughter Suleme, born three months after his capture. In 1999, he sued the Iranian government for $100 million, accusing it of sponsoring his kidnappers; he received a multi-million dollar settlement.