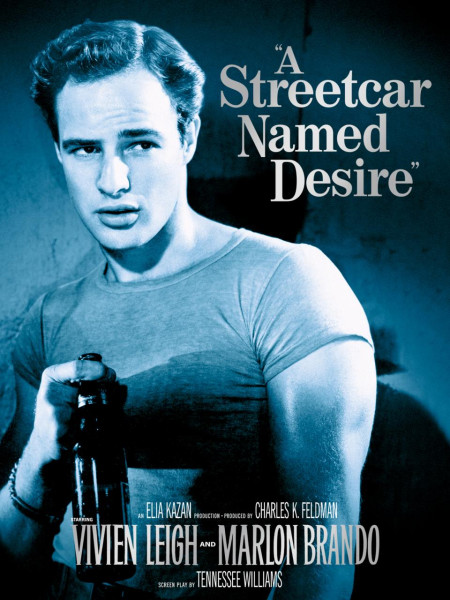 On this day in 1947, Marlon Brando’s famous cry of “STELLA!” first booms across a Broadway stage, electrifying the audience at the Ethel Barrymore Theatre during the first-ever performance of Tennessee Williams’ play A Streetcar Named Desire. The 23-year-old Brando played the rough, working-class Polish-American Stanley Kowalski, whose violent clash with Blanche DuBois (played on Broadway by Jessica Tandy), a Southern belle with a dark past, is at the center of Williams’ famous drama. Blanche comes to stay with her sister Stella (Kim Hunter), Stanley’s wife, at their home in the French Quarter of New Orleans; she and Stanley immediately despise each other. In the climactic scene, Stanley rapes Blanche, causing her to lose her fragile grip on sanity; the play ends with her being led away in a straitjacket. Streetcar, produced by Irene Mayer Selznick and directed by Elia Kazan, shocked mid-century audiences with its frank depiction of sexuality and brutality onstage. When the curtain went down on opening night, there was a moment of stunned silence before the crowd erupted into a round of applause that lasted 30 minutes. On December 17, the cast left New York to go on the road. The show would run for more than 800 performances, turning the charismatic Brando into an overnight star. Tandy won a Tony Award for her performance, and Williams was awarded the Pulitzer Prize for Drama. In 1951, Kazan made Streetcar into a movie. Brando, Hunter and Karl Malden (as Stanley’s friend and Blanche’s love interest) reprised their roles. The role of Blanche went to Vivien Leigh, the scenery-chewing star of Gone with the Wind. Controversy flared when the Catholic Legion of Decency threatened to condemn the film unless the explicitly sexual scenes–including the climactic rape–were removed. When Williams, who wrote the screenplay, refused to take out the rape, the Legion insisted that Stanley be punished onscreen. As a result, the movie (but not the play) ends with Stella leaving Stanley. A Streetcar Named Desire earned 12 Oscar nominations, including acting nods for each of its four leads. The movie won for Best Art Direction, and Leigh, Hunter and Malden all took home awards; Brando lost to Humphrey Bogart in The African Queen.
Collapse