On this day in 1981, the actress Natalie Wood, who starred in such movies as Rebel Without a Cause and West Side Story, drowns in a boating accident near California’s Catalina Island. She was 43 years old. Born Natalia Nikolaevna Zakharenko on July 20, 1938, in San Francisco, California, Wood began her acting career as a child. She gained acclaim for her role as Susan Walker, the little girl who doubts the existence of Santa Claus in Miracle on 34th Street (1947). As a teenager, Wood went on to play James Dean’s girlfriend in Rebel Without a Cause (1955), for which she received a Best Supporting Actress Oscar nomination. She also earned Best Actress Academy Award nominations for her performances in Splendor in the Grass (1961) with Warren Beatty and Love with the Proper Stranger (1963) with Steve McQueen. Wood’s film credits also include West Side Story (1961), winner of 10 Oscars, in which she played the lead role of Maria; Gypsy (1962), which was based on the hit Broadway musical of the same name and co-starred Rosalind Russell and Karl Malden; The Great Race (1965), with Jack Lemmon and Tony Curtis; Inside Daisy Clover (1966), with Christopher Plummer and Robert Redford; and Bob & Carol & Ted & Alice (1969) with Robert Culp, Elliott Gould and Dyan Cannon. Wood was twice married to the actor Robert Wagner (Hart to Hart, Austin Powers: International Man of Mystery), from 1957 to 1962 and from 1974 to the time of her death. On the night of November 29, 1981, the dark-haired beauty was with her husband on their yacht “The Splendor,” which was moored off Santa Catalina, near Los Angeles. Also on the yacht was the actor Christopher Walken, who at the time was making the movie Brainstorm with Wood. Neither Wagner nor Walken saw what happened to Wood that night, but it was believed she somehow slipped overboard while untying a dinghy attached to the boat. Her body was found in the early hours of the following morning. Brainstorm, Wood’s final film, was released in theaters in 1983. 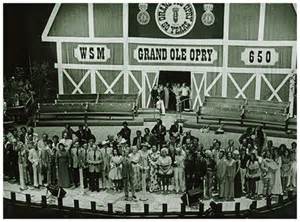 On this in day in 1925 the Grand Ole Opry, one of the longest-lived and most popular showcases for western music, begins broadcasting live from Nashville, Tennessee. The showcase was originally named the Barn Dance, after a Chicago radio program called the National Barn Dance that had begun broadcasting the previous year. Impressed by the popularity of the Chicago-based National Barn Dance, producers at WSM radio in Nashville decided to create their own version of the show to cater to southern audiences who could not receive the Chicago signal. Both the Grand Ole Opry and the National Barn Dance aired on Saturday nights and featured folk music, fiddling, and the relatively new genre of country-western music. Both shows created a growing audience for a uniquely American style of music and were launching grounds for many of America’s most-loved musicians–the singing cowboy Gene Autry got his first big break on the National Barn Dance. The WSM producers recognized that Americans were growing nostalgic for the rural past, so all live performers at the Grand Ole Opry were required to dress in hillbilly costumes and adopt old-time names. The four-and-a-half-hour Grand Ole Opry program became one of the most popular broadcasts in the South, and like its Chicago cousin, helped make country-western an enduring part of the popular American musical landscape.
Collapse