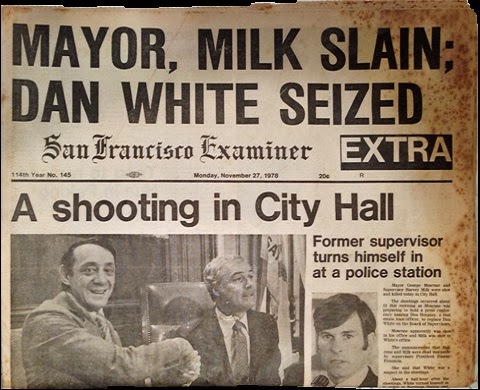 On this day in 1978 former Board of Supervisors member Dan White murders Mayor George Moscone and Supervisor Harvey Milk at City Hall in San Francisco, California. White, who stormed into San Francisco’s government offices with a .38 revolver, had reportedly been angry about Moscone’s decision not to reappoint him to the city board. Firing upon the mayor first, White then reloaded his pistol and turned his gun on his rival Milk, who was one of the nation’s first openly gay politicians and a much-admired activist in San Francisco. Future California Senator and then-Supervisor Dianne Feinstein, who was the first to find Milk’s body, found herself addressing a stunned crowd at City Hall. “As president of the Board of Supervisors, it’s my duty to make this announcement: Both Mayor Moscone and Supervisor Harvey Milk have been shot and killed. The suspect is supervisor Dan White.”White, who was caught soon after the murders, pleaded a “diminished capacity” defense, claiming that copious amounts of junk food, combined with distress over the loss of his job, caused him to suffer mental problems. The so-called “Twinkie Defense” appeared to be successful, and, in 1979, White was found guilty of voluntary manslaughter rather than murder. Public outrage was so widespread that California revoked the diminished capacity defense in subsequent cases. Following the murders, both riots and peaceful candlelight demonstrations took place as the city of San Francisco publicly mourned the loss of two of its most cherished and respected civic leaders. For his crime, White received a five-year prison sentence. After his release, he was unable to resume a normal life, and he took his own life in 1986.
Collapse