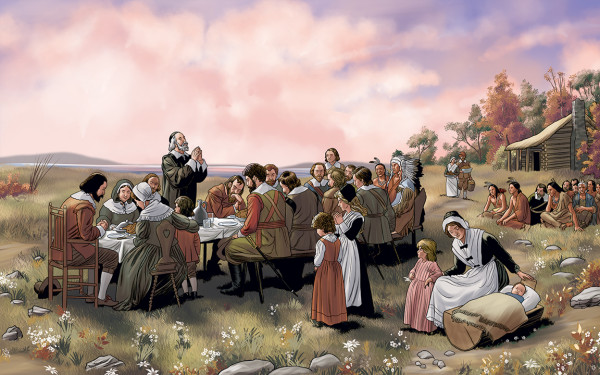 On this day in 1941 President Franklin D. Roosevelt signs a bill officially establishing the fourth Thursday in November as Thanksgiving Day. The tradition of celebrating the holiday on Thursday dates back to the early history of the Plymouth and Massachusetts Bay colonies, when post-harvest holidays were celebrated on the weekday regularly set aside as “Lecture Day,” a midweek church meeting where topical sermons were presented. A famous Thanksgiving observance occurred in the autumn of 1621, when Plymouth governor William Bradford invited local Indians to join the Pilgrims in a three-day festival held in gratitude for the bounty of the season. Thanksgiving became an annual custom throughout New England in the 17th century, and in 1777 the Continental Congress declared the first national American Thanksgiving following the Patriot victory at Saratoga. In 1789, President George Washington became the first president to proclaim a Thanksgiving holiday, when, at the request of Congress, he proclaimed November 26, a Tuesday, as a day of national thanksgiving for the U.S. Constitution. However, it was not until 1863, when President Abraham Lincoln declared Thanksgiving to fall on the last Thursday of November, that the modern holiday was celebrated nationally. With a few deviations, Lincoln’s precedent was followed annually by every subsequent president–until 1939. In 1939, Franklin D. Roosevelt departed from tradition by declaring November 23, the next to last Thursday that year, as Thanksgiving Day. Considerable controversy surrounded this deviation, and some Americans refused to honor Roosevelt’s declaration. For the next two years, Roosevelt repeated the unpopular proclamation, but on November 26, 1941, he admitted his mistake and signed a bill into law officially making the fourth Thursday in November the national holiday of Thanksgiving Day.
Collapse