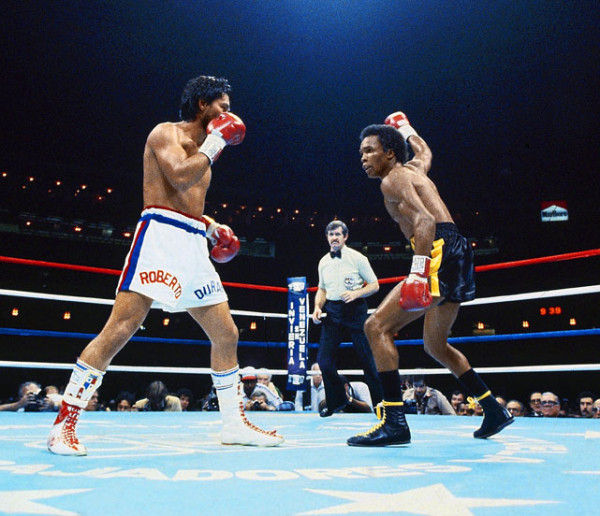 On November 25, 1980, Sugar Ray Leonard regains boxing’s welterweight title when his opponent, reigning champ Roberto Duran, waves his arms and walks away from the fight in the eighth round. “No más, no más,” Duran told the referee. “No more box.” He’d had cramps in his stomach since the fifth, he said, and they’d gotten so bad he could barely stand up. It was the first time a champion had given up his title voluntarily since Sonny Liston’s shoulder injury forced him to quit a fight with Muhammed Ali, then Cassius Clay, in 1964. And it didn’t seem like something Duran would do: He was a notoriously fierce, brutal fighter, celebrated in his native Panama for his unwillingness to show his opponents any mercy. Before the fight with Leonard, Duran had only lost one of his 73 professional bouts, to Esteban DeJesus eight years before, and he’d taken the welterweight title from Leonard in June in the fairly one-sided “Brawl in Montreal.” In that match, Duran had kept a bewildered Leonard pinned against the ropes for almost the entire fight, punching him relentlessly. But Sugar Ray had been training ever since, and he was favored to win the rematch. His training paid off: Leonard stayed on his toes and away from the edges of the ring, and by the eighth round Duran was flagging and Leonard was winning on each judge’s scorecard. Two minutes and forty-four seconds into that round, after a particularly punishing series of blows, Duran had had enough. He walked away, signaled the ref and sat down in this corner. Many people though that he quit because he was tired of putting up with Leonard’s clowning and taunting; some thought he’d taken a dive; and some said he simply wanted to collect his purse and go home. But Duran maintained that he was sick. After the match, his doctor reported that the fighter had eaten too much too quickly after the weigh-in, and all the food had given him a stomachache. This news didn’t do much to help his image, as Leonard pointed out. “He didn’t take the easy way out,” Duran’s adversary said. “He took the worst way out.” Right after the bout ended, the 29-year-old Duran announced that he was retiring from boxing. “I’ve gotten tired of the sport,” he said. But in December 1989, he came back for a rematch—”Uno Más,” promoters called it. Leonard won that fight, a lethargic bout all around, in 12 rounds.

Comment ... When I worked at Bradley Airport I met Sugar Ray passing through the Terminal building going on my daily chores as Airport Electrician. He stopped and shook my hand.. He had the greatest smile..
Collapse