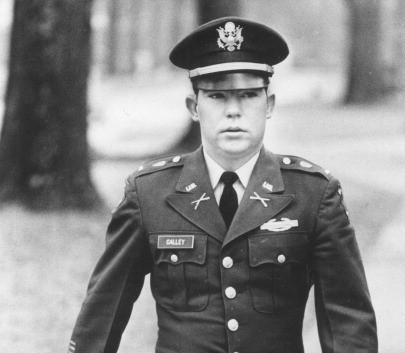 On this day in 1969 U.S. Army officials announce 1st Lt. William Calley will be court-martialed for the premeditated murder of 109 Vietnamese civilians at My Lai. In Washington, Army Secretary Stanley Resor and Army Chief of Staff William C. Westmoreland announced the appointment of Lt. Gen. William R. Peers to “explore the nature and scope” of the original investigation of the My Lai slayings in April 1968. The initial probe, conducted by the unit involved in the affair, concluded that no massacre occurred and that no further action was warranted. The My Lai Massacre took place in March 1968, when between 200 and 500 South Vietnamese civilians were murdered by U.S. soldiers from Company C, 1st Battalion, 20th Infantry, 11th Infantry Brigade of the Americal Division. During a sweep of a cluster of hamlets, the U.S. soldiers, particularly those from Calley’s first platoon, indiscriminately shot people as they ran from their huts. They then systematically rounded up the survivors, allegedly leading them to a ditch where Calley gave the order to “finish them off.” After an investigation by the Army Criminal Investigation Division, 14 were charged with crimes. All eventually had their charges dismissed or were acquitted, except Calley, who was found guilty of murdering 22 civilians and sentenced to life imprisonment. His sentence was reduced twice and he was paroled in November 1974.

Comment .... For a Thanksgiving day a lot has happened but what stands out to me is the story Of Lt. Calley and the My Lai Massacre. On August 19, 2009, while speaking to the Kiwanis Club of Greater Columbus, Calley issued an apology for his role in the My Lai massacre. Calley said - "There is not a day that goes by that I do not feel remorse for what happened that day in My Lai. I feel remorse for the Vietnamese who were killed, for their families, for the American soldiers involved and their families. I am very sorry.... If you are asking why I did not stand up to them when I was given the orders, I will have to say that I was a 2nd Lieutenant getting orders from my commander and I followed them, foolishly, I guess."
Collapse