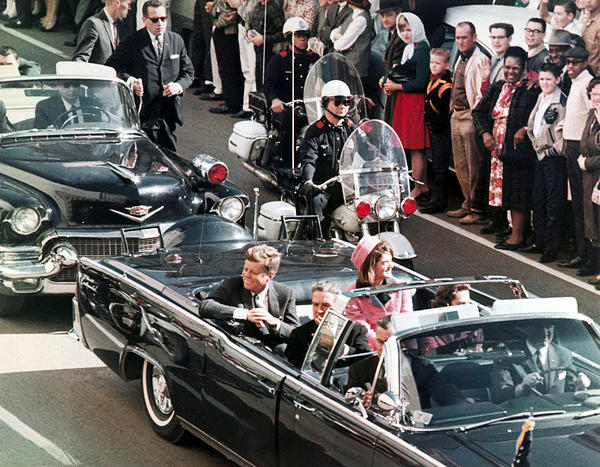 On this day in 1963, the nation is shocked by the assassination of its president, John F. Kennedy. Kennedy was riding in an open car in Dallas, Texas, when a gunman named Lee Harvey Oswald fired three shots at him from an upper-level window of a nearby building. Kennedy was pronounced dead upon arrival at a Dallas hospital. He was the fourth president in U.S. history to be assassinated. A bystander named Abraham Zapruder happened to capture Kennedy’s shooting on his 8mm home-movie camera. Zapruder’s film provided graphic visuals of JFK’s death and has since been analyzed extensively for evidence of a potential conspiracy. Even decades later, some scholars, investigators and amateur sleuths continue to insist that Kennedy’s death was a coup d’etat committed by hard-line U.S. anti-communists who feared Kennedy would pull U.S. advisors out of Vietnam and act “soft” on the communist threat from the USSR. Another conspiracy theory that involves a coordinated effort by organized crime, the Pentagon and the CIA to murder the president was explored by director Oliver Stone in his 1991 film JFK. In 1964, however, the federally appointed Warren Commission issued a report on the assassination and concluded that Oswald acted alone. A second investigation conducted in 1979 concluded that there may have been a second gunman, but it concurred with the first report that Oswald was the actual killer. In 1865, Abraham Lincoln became the first president to be assassinated when he was shot by a Confederate sympathizer while attending a play at Ford’s Theater in Washington, D.C. In 1881, James Garfield was shot by a disgruntled federal employee and lived 80 days before succumbing to his wounds. William McKinley was killed by an anarchist in 1901. Several other presidents have survived or narrowly avoided assassination attempts. Ronald Reagan was shot in the chest in 1981, but survived. Gerald Ford escaped two assassination attempts. An attempt on Andrew Jackson’s life in 1835 was foiled when both of the gunman’s two pistols failed to discharge properly.


Comment ...... That day I was in the back of Bradley Airport clearing brush with some prisoners that I picked up from the Sims Street jail in Hartford Connecticut. On the way back I noticed the flag was at half staff at the Air National Guard area. In those days it was a rare thing to see that.. We found out a few minutes later what happened.. Some of the black prisoners were crying and hysterical.. Later that evening my wife and I watched as Walter Cronkite explained for many hours what happened. I seen Jack Ruby shoot Lee Harvey Oswald to death on live TV... I will never forget that day..
Collapse