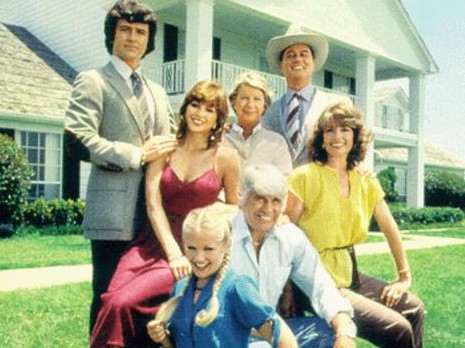 On this day in 1980, 350 million people around the world tune in to television’s popular primetime drama “Dallas” to find out who shot J.R. Ewing, the character fans loved to hate. J.R. had been shot on the season-ending episode the previous March 21, which now stands as one of television’s most famous cliffhangers. The plot twist inspired widespread media coverage and left America wondering “Who shot J.R.?” for the next eight months. The November 21 episode solved the mystery, identifying Kristin Shepard, J.R.’s wife’s sister and his former mistress, as the culprit. The CBS television network debuted the first five-episode pilot season of “Dallas” in 1978; it went on to run for another 12 full-length seasons. The first show of its kind, “Dallas” was dubbed a “primetime soap opera” for its serial plots and dramatic tales of moral excess. The show revolved around the relations of two Texas oil families: the wealthy, successful Ewing family and the perpetually down-on-their-luck Barnes family. The families’ patriarchs, Jock Ewing and Digger Barnes, were former partners locked in a years-long feud over oil fields Barnes claimed had been stolen by Ewing. Ewing’s youngest son Bobby (Patrick Duffy) and Barnes’ daughter Pam (Victoria Principal) had married, linking the battling clans even more closely. The character of J.R. Ewing, Bobby’s oldest brother and a greedy, conniving, womanizing scoundrel, was played by Larry Hagman. As J.R. had many enemies, audiences were hard-pressed to guess who was responsible for his attempted murder. That summer, the question “Who Shot J.R.?” entered the national lexicon, becoming a popular t-shirt slogan, and heightening anticipation of the soap’s third season, which was to air in the fall. After a much-talked-about contract dispute with Hagman was finally settled, the season was delayed because of a Screen Actors Guild strike, much to the dismay of “Dallas” fans. When it finally aired, the episode revealing J.R.’s shooter became one of television’s most watched shows, with an audience of 83 million people in the U.S. alone—a full 76 percent of all U.S. televisions on that night were tuned in—and helped put “Dallas” into greater worldwide circulation. It also popularized the use of the cliffhanger by television writers. The shooting of J.R. wasn’t “Dallas'”only notorious plot twist. In September 1986, fans learned that the entire previous season, in which main character Bobby Ewing had died, was merely a dream of Pam’s. The show’s writers had killed the Bobby character off because Duffy had decided to leave the show. When he agreed to return, they featured him stepping out of the shower on the season-ending cliffhanger, and then were forced the next season to explain his sudden reappearance. The last premiere episode of “Dallas” aired on May 3, 1991. A spin-off, “Knots Landing,” aired from December 27, 1979 until May 13, 1993. “Dallas” remains in syndication around the world.

Comment .... I remember this.. I'll bet every television in America was tuned in to this show..
Collapse