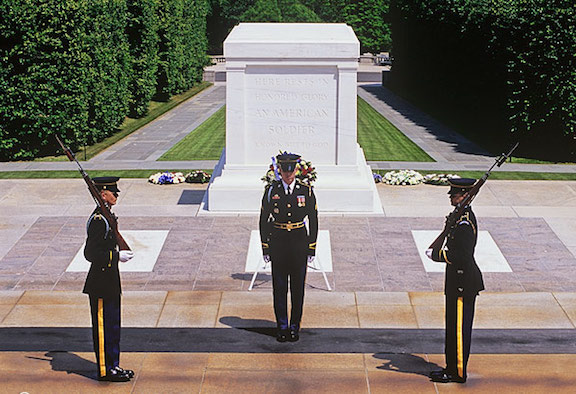 On this date in 1921 exactly three years after the end of World War I, the Tomb of the Unknowns is dedicated at Arlington Cemetery in Virginia during an Armistice Day ceremony presided over by President Warren G. Harding. Two days before, an unknown American soldier, who had fallen somewhere on a World War I battlefield, arrived at the nation’s capital from a military cemetery in France. On Armistice Day, in the presence of President Harding and other government, military, and international dignitaries, the unknown soldier was buried with highest honors beside the Memorial Amphitheater. As the soldier was lowered to his final resting place, a two-inch layer of soil brought from France was placed below his coffin so that he might rest forever atop the earth on which he died. The Tomb of the Unknowns is considered the most hallowed grave at Arlington Cemetery, America’s most sacred military cemetery. The tombstone itself, designed by sculptor Thomas Hudson Jones, was not completed until 1932, when it was unveiled bearing the description “Here Rests in Honored Glory an American Soldier Known but to God.” The World War I unknown was later joined by the unidentified remains of soldiers from America’s other major 20th century wars and the tomb was put under permanent guard by special military sentinels. In 1998, a Vietnam War unknown, who was buried at the tomb for 14 years, was disinterred from the Tomb after DNA testing indicated his identity. Air Force Lieutenant Michael Blassie was returned to his hometown of St. Louis, Missouri, and was buried with military honors, including an F-15 jet “missing man” flyover and a lone bugler sounding taps.