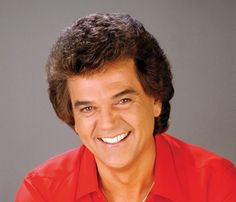 On this date in 1958 future country legend Conway Twitty earns a #1 hit as a rock-and-roll idol. Between 1965 and his death in 1993, the legendary Conway Twitty placed an astonishing 40 #1 hits on the country-music charts. Indeed, no performer in the history of country music, including Garth Brooks, ever put together a stretch as dominant as Twitty did during the peak years of his career between 1974 and 1982, when 24 out of 33 consecutively released singles became country #1s. But those who know Conway Twitty only through such country hits as “Hello Darlin'” (1970) and “Tight Fittin’ Jeans” (1981) may be surprised to learn that a man known as the “High Priest of Country Music” began his career as a bona fide rock-and-roller. On this day in 1958—fully 10 years before his first country chart-topper—Conway Twitty scored his very first #1 hit on the pop charts, with the rock-and-roll ballad “It’s Only Make Believe.” Rock and roll and country (then commonly referred to as “Hillbilly music”) were not always easy to distinguish from each other in the late 1950s, but that doesn’t explain Conway Twitty’s achievement. While many performers scored simultaneous hits on the country and pop charts with their releases during the early years of rock and roll, Conway Twitty never landed a hit of any kind on the country charts until 1966. Country music was in his bones thanks to an upbringing in Mississippi and Arkansas, but it was Elvis Presley that he set out to emulate at the beginning of his professional career. Fresh from a stint in the U.S. Army, the 23-year-old Harold Lloyd Jenkins heard Elvis’s “Mystery Train” (1955) and immediately decided to pass on a minor-league contract with baseball’s Philadelphia Phillies in favor of pursuing a recording deal with Elvis’s Memphis, Tennessee, record label, Sun Records. His first recordings with Sun’s legendary Sam Phillips were never released, but two more years of performing experience and a change of name led to a five-year contract with MGM for Conway Twitty in 1958. (The name was chosen from two towns on a map: Conway, Arkansas, and Twitty, Texas.) His second release, “It’s Only Make Believe,” which featured Elvis-backups the Jordanaires on backing vocals, shot all the way to #1 on the Billboard pop chart. Listen to a few bars of “It’s Only Make Believe” and you might think you’re hearing Elvis himself. But perhaps the greatest proof of Conway Twitty’s early status as a rock-and-roll idol can be found in the 1960 Broadway musical Bye Bye Birdie, whose lead character’s name—Conrad Birdie—was directly inspired by the man who scored the first of his many #1 hits on this day in 1958..
Collapse