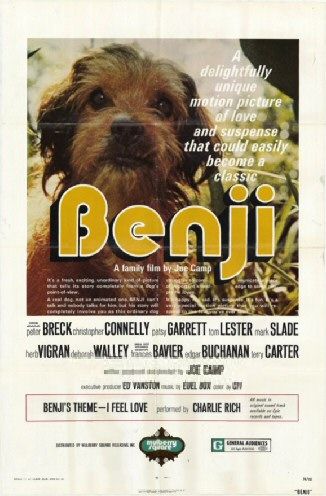 On this day in 1974, Benji, a film about a stray dog who helps rescue several kidnapped children, opens in theaters; it will go on to become a family classic. Written and directed by Joe Camp, Benji starred a mutt named Higgins, who had been rescued as a puppy from a California animal shelter and went on to appear in the 1960s TV series Petticoat Junction and the 1971 movie Mooch Goes to Hollywood, with Zsa Zsa Gabor. Benji was a commercial hit and spawned a series of TV movies as well as the follow-up features For the Love of Benji (1977), Oh Heavenly Dog (1980) and Benji the Hunted (1987), all starring Higgins’ daughter Benjean. Another movie, Benji: Off the Leash! was released in 2004 and featured another pooch that Joe Camp had found at an animal shelter. Dogs have long had a starring role in Hollywood. Starting in the 1920s, the German Shepherd Rin Tin Tin, who was rescued from a dog kennel in France during World War I, appeared in a number of successful films for Warner Brothers and reportedly saved the studio from bankruptcy. Perhaps the most famous canine character in entertainment history is Lassie. The loyal collie originated in a 1938 short story by Eric Knight, about a boy whose faithful companion is sold after his family falls on hard times, and was also featured in a 1940 novel set in Great Britain titled Lassie Come-Home. The novel was adapted into a 1943 movie of the same name, starring Elizabeth Taylor and Roddy MacDowell. Several more Lassie films and a Lassie radio show followed in the 1940s. From 1954 to 1973, CBS aired an Emmy-winning TV series called Lassie and set in America. More Lassie movies followed, including 2005’s Lassie, starring Peter O’Toole and Samantha Morton. During the 1950s and 1960s, Disney released a string of dog-themed films, including Lady and the Tramp (1955), Old Yeller (1957), and One Hundred and One Dalmatians (1961). Another classic from that era is The Incredible Journey (1963), about two dogs and a cat who lose their owners on vacation and must find their way home. During the 1970s and 1980s, Benji was the top dog in Hollywood. The late 1980s and 1990s saw such movies as Turner and Hooch (1989), in which Tom Hanks played a man who must adopt the dog of a dead man to help catch a murderer; Beethoven (1992), about a St. Bernard; 1996’s 101 Dalmatians, with Glenn Close as the notorious dognapper Cruella de Vil; and Air Bud (1997), about a basketball-playing dog. More recent canine films include My Dog Skip (2000), with Frankie Muniz, Kevin Bacon, Luke Wilson and Diane Lane; Best in Show (2000), a parody of the world of dog shows directed by Christopher Guest (Waiting for Guffman, A Mighty Wind); Because of Winn-Dixie (2005); and Beverly Hills Chihuahua (2008), in which the main character is voiced by Drew Barrymore.
Collapse