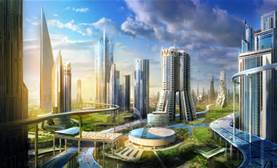 I used a little bit of my imagination in this piece. The sick part of this is the way things are going these days and big business keeps controlling our country it could happen. ... I'm glad I won't be here and I feel sorry for those of you that are..
President Malia Obama (Obama's Daughter) in her news conference today announced today that the new steroid growth hormone for live stock has passed the rigorous testing by the FDA. From now on all livestock will be given this chemical twice a day and will grow faster and produce more meat. She said, "now the slaughter houses will be able to keep up with the demand at the fast food restaurants". Livestock will be slaughtered each day instead of every six months. The President said it is harmless to humans but would not comment on the millions of overweight people and heart attacks in the country. Meanwhile all local Walmart stores have starting stocking rotund sizes for children ages 6 to 12.
She also announced that Walmart is the only store left in this country. She congratulated Walmart executives for manipulating and driving all other stores out of business commenting, "with no competition they can charge anything they want". The only stores left are a few drug and gas convenience stores. She said our foreign friends need to have a place to own and work.. Meanwhile Walmart employees will be taking a pay cut because there in no other place to work...
The President also announced today that effective immediately the new country wide posted State highway speed will be 150 mph. Back roads speeds will be increased from 30 to 90 mph. Effective immediately. Because of over population and driver licenses being issued to all illegal immigrants driving will only be permitted on odd or even days. Your license plate number will be used to determine if its your day to drive. If caught driving on the wrong day a one year mandatory jail sentence and a $10,000 dollar fine will be issued. Drones will be flying over highways and cameras installed on the highways and roads will issue the fine to be sent in your mail. The computer that runs your car will shut off automatically and the car will stall. Towing charges by the State and Government will be $5000.
Also in the news… When starting the new school year it will be mandatory for children ages 5 to 18 to wear a bullet proof vest when entering school property. The bullet proof vest sale starts at Walmart this weekend. Also as an after thought she said no one will be able to enter a Shopping Mall or Super Market without body armor. Store security will start strip searching people before entering any store. This is including movie theaters and churches. The President said, “Your safety comes first.”
In 3 days it will be legal to buy Cocaine without a prescription. It will be sold in Walmart and all drug, convenience stores. Congress said the taxes selling this will help paying our $931 Quadrillion dollar debt. They said if everything goes well it should be paid off in 300 years if there are no wars…
Update......Because of the increase in the minimum wage to $34.61 an hour all fast food hamburgers will go up to $99.99 each. The price of fries will go to $55.99 for a small bag.
Gas prices in America increased today to $1061.73 per barrel making the price per gallon of gas raise to $397.99 per gallon.
As a side note she also said effective immediately the new Federal retirement age for Social Security will be 80 years old. Senators and Congress will still be able to retire after 1 term with full pay, lifetime benefits and full medical.

On September 28, 1918, a Philadelphia parade is ground zero for a huge outbreak of the flu in the city, which then spreads across the country. Although the exact origin of the 1918 flu pandemic is not known, by the time it ends, an estimated 30 million people worldwide are dead.
Collapse